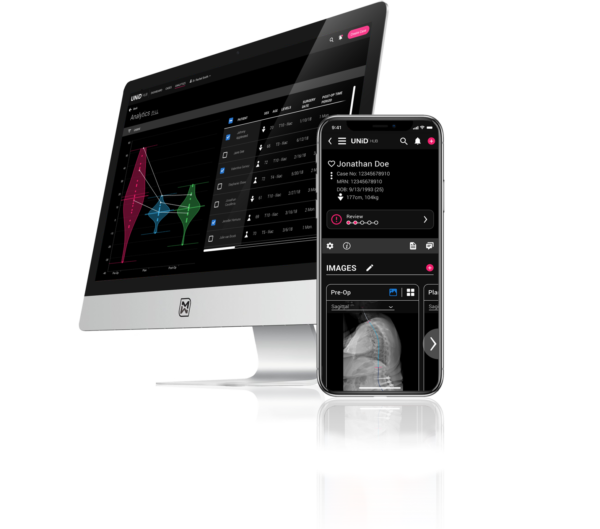 Medtronic’s general surgery robot — Hugo — will have some major catching up to do given that the top dog in the robotics world —  Intuitive Surgical’s Da Vinci robot — has solidified its lead over the years despite many competitors. But when it comes to Medtronic’s spine division, the Irish medtech giant is in much better shape.

Since acquiring Mazor Robotics in 2018, the company has obtained a strong foothold in the robot-assisted spinal surgery market. However, despite its lead, Medtronic will have to contend with competitors like Globus Medical’s Excelsius robot that is expected to gain share as overall adoption of robots in spine surgery increases according to analysts from SVB Leerink. Still, if a senior Medtronic executive is to be believed, Medtronic is creating a compelling case for robot-assisted complex spine surgery, now augmented by artificial intelligence. In a recent interview, Jacob Paul, senior vice president of cranial and spinal technologies, said that the company’s European AI acquisition will leave its competitors biting the dust as with it, Medtronic has all the pieces to provide a comprehensive spinal surgery system to its surgeon customers.

The acquisition that Paul is referring to is that of Lyon, France-based Medicrea, which became part of Medtronic in mid November at a cost of  200 million euros (roughly $243 million). The French startup provides AI-driven surgical planning and predictive modeling tools that helps to create personalized implants that in turn provides a better surgeon experience and more importantly, improved surgical outcomes for patients. Aside from the AI, the company has a portfolio of FDA-cleared spinal technologies including the ability to make 3-D printed customized rods.

Medtronic’s goal is to create the “augmented surgeon” with the help of surgical navigation, robotics and artificial intelligence.

“So navigation is the eyes, robotics is the hand that automates the surgery and now with AI we have the brain,” Paul explained.

So how exactly does it work?

Any patient undergoing complex spinal surgery will have medical imaging — generally, CT scans — done to understand how to correct for abnormalities/deformities in the spine. These images help the surgeons to decide how to align the spine correctly and what is the curvature needed in the rod to give the patient a better quality of life. How good that decision depends on a surgeon’s experience.

“It’s an inexact science,” Paul explained referring to the final decision that surgeons have to make on how much correction a deformed spine needs. “Surgeons tend to overcorrect, which then causes too much stress on the rest of the spine and the patient has to come back for a revision surgery.”

It is here that Medicrea’s AI engine can be more precise. The company has developed a repository of 6,000 3-D images based on which the AI engine can provide the optimal curvature post surgery and can even say how rod and screw placement can affect adjacent regions. This takes out the guesswork and can create a more reproducible surgery with better outcomes, Paul said. Add to that the advantage of making the data set more robust as more images are added, thereby making the AI prediction engine even better. Paul also noted that the data set is diverse — in other words, the AI predicitons will not be inaccurate for people of different races because the algorithm wasn’t trained on any one specific race.

In a normal spine surgery, once the decision about the rod curvature and alignment is made, the surgeon has to then contend with the actual rod.

“When they go into the OR, the surgeon has to do a very difficult process — bending a really tough rod, cobalt-chrome in most cases, with a device that looks like pliers,” Paul said.

Here Medicrea is able to provide a level of customization that is relatively new to the world of spinal surgery that has in the past worked with off-the-shelf implants. Based on a surgeon’s decision, Medicrea is able to use 3-D printing to manufacture the spinal rod and pre-bend based on the parameters already selected by surgeon and then have it shipped for final surgery.

“It plans the surgery and provides 3 or 4 different options and then based on that, the surgeon can decide based on level of correction which option to have and then the approve the plan and we send them a personalized rod based on that patient’s pathology,” Paul said.

All of this is invaluable to Dr. Ronald Lehman Jr., a Medtronic consultant, a tenured professor as well as Chief of Degenerative, Minimally Invasive and Robotic Surgery at the Spine Hospital within the Columbia University Irving Medical Center.

This is be the biggest game changer for spine surgery into the future.  The powerful planning software with the X Align as part of the Mazor Stealth Edition combined with a [large] case repository of surgeries will allow surgeons to plan, execute and achieve optimal results.  Any time a surgery can be executed with precision and accuracy, it is safer for the patient, more reproducible for surgeons of all levels of training and expertise, and will decrease risks of proximal junctional kyphosis and failure by achieving the desired results.

Proximal junctional kyphosis is a common complication that develops in 39% of adults following surgery to correct for spinal deformity. This complication may lead to the need for revision surgery.

The other advantage is purely financial. If a customized rod can be sent, then time is saved in the OR, which reduces costs. And of course, not having to do revision surgeries also has a direct financial implication.

“It will save time in the OR and then for the health system and the payer costs will be reduced because there will be fewer revision surgeries,” Paul declared, while acknowledging that Medtronic is building the economic evidence around this.

Currently, the AI engine can be tapped from Medicrea even without the surgeon opting to use the Mazor robot, Paul said. But in the next year or so, the plan is to integrate the robot with Medicrea’s AI system. 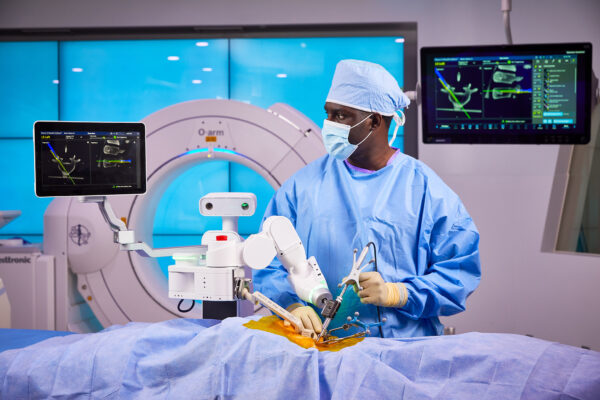 “This product makes us the first company to offer an integrated solution with AI- driven planning, personalized implants and robotic-assisted surgery,” he noted.

While that may indeed happen, the reality is that the robotic surgery is still in its infancy. In fact, Paul didn’t answer what portion of overal spinal surgery is done using the Mazor robot though he did say that there is evidence that placing pedicle screws with a robot is far more accurate than placing free hand.

A Globus Medical’s Excelsius robot user told SVB Leerink equity analysts that he places 100 percent of pedicle screws using the robot and expects that section of the spine market to be at least 50 percent penetrated in the next five years. All of this bodes well for Medtronic and Globus Medical and perhaps also for Johnson and Johnson, and NuVasive that are developing their own systems.

But the winner in the end might be a wholly different company. The one to watch out for is Stryker, even though its MAKO robot that made its name in robotic knee surgery, is several years away from debuting in the spine segment behind that of J&J and Nuvasive. A research note from Richard Newitter, the SVB Leering equity research analyst, said that two surgeons, one of whom is a heavy user of Medtronic’s Mazor robot and the other a heavy user of Globus Medical’s Excelsius robot, agreed to the following:

100Mbps uploads and downloads should be US broadband standard, senators say – Ars Technica