The game will be relocated to AT&T Stadium in Arlington, Texas, because families of the football teams would not be able to attend a game at the Rose Bowl. The Tournament of Roses said it received word late this week that the state of California would not make a special exception for player guests at the game.

It is not yet determined what the name of this semifinal game will be, according to the Tournament of Roses
website. The other semifinal game is the Sugar Bowl in New Orleans, Louisiana.

“We are pleased that parents and loved ones will now be able to see their students play in the game,” Hancock said.

“We are very grateful to Rose Bowl officials and the City of Pasadena. They have worked hard to listen to the concerns of the CFP, the teams that might have played there, and their state and government officials. The Tournament of Roses has acted in the best interest of the people who live in Southern California. And we’re grateful to Cotton Bowl and AT&T Stadium officials for their ability to make this late switch possible.

“Add this to the list of ways 2020 has demanded flexibility and last-minute accommodation from everyone in college football. Given all the complexities and difficulties involved, this is the best outcome for everyone concerned.”

The four-team College Football Playoff will be announced on Sunday. The semifinals will be on January 1, and the national championship game is scheduled for January 11 at Hard Rock Stadium in Miami Gardens, Florida. 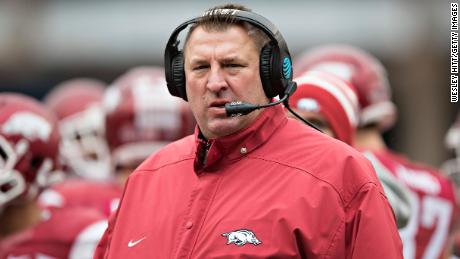 “We know that the decision was not an easy one to make,” David Eads, Tournament of Roses CEO and executive director, said in a statement. “While we remain confident that a game could have been played at the Rose Bowl Stadium, as evident in the other collegiate and professional games taking place in the region, the projection of COVID-19 cases in the region has continued on an upward trend.”

On Friday, Notre Dame head football coach Brian Kelly told reporters he wasn’t sure if his team would play in the playoffs if families couldn’t be there. Kelly supported moving the semifinal at the Rose Bowl to a different location.

“They’ve got to figure out how to make sure that whatever sites they play at, that the parents are going to be watching their sons play,” Kelly said.

“It makes no sense to me to put a bunch of kids on a plane and fly them all the way to California to play in an empty stadium. That makes zero sense when you have plenty of stadiums where you can have fans and, most importantly, you can have families.”