McDonald’s has entered the fray during an already strange year, as the American fast-food company is now selling a burger made of Spam and topped with Oreo cookies Monday in China.

McDonald’s Corp. said the limited-edition burger, which costs about 13.14 yen ($2), was part of a series of “members only” promotions to be released on Mondays in the country, according to reports.

The burger is made of two extra-thick slices of Spam, crushed Oreo cookies, and topped with a creamy white sauce that some have speculated to be mayonnaise. The unique combination has prompted users on social media, as well as U.S. politicians, to raise their eyebrows. 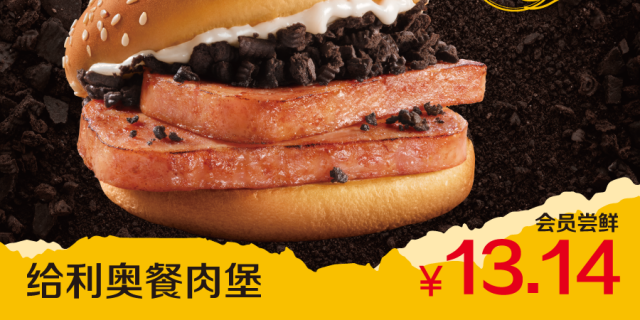 “Welp, I [k]now what my nightmares are going to look like tonight,” another user wrote on Twitter.

“Imagine taking a bite, thinking the Mayo is the sweet frosting in between the Oreos,” another replied.

Others appeared slightly intrigued by the offbeat product that global brands sometimes roll out to appeal to Chinese tastes.

“I thought it was delicious,” said a comment signed Feifei Mao Enthusiast on the Sina Weibo microblog service. “Is that because I love McDonald’s too deeply? Or is something wrong with my taste?”

“Hey, if there is a market for it, who am I to judge what people eat,” another user wrote on Twitter.

McDonald’s said it planned to sell no more than 400,000 of the “Lunchmeat Burgers.” As of Tuesday morning, it wasn’t clear how many had been sold.

“When you hate someone but have to invite him to dinner, you can ask him to eat McDonald’s Oreo lunchmeat burger,” said another comment on Sina Weibo.

The Associated Press contributed to this report