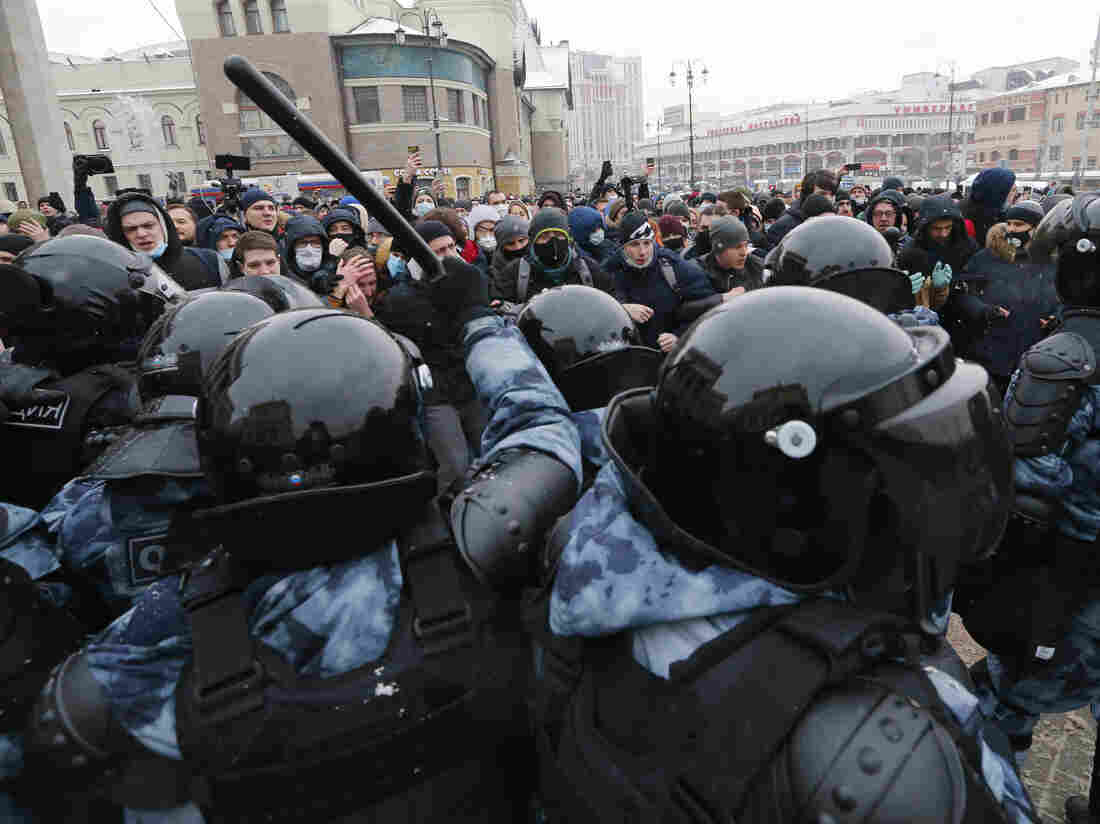 Demonstrators in Moscow clash with police Sunday during a protest against the jailing of Alexei Navalny. Thousands of people took to the streets across Russia to demand the opposition leader’s release. 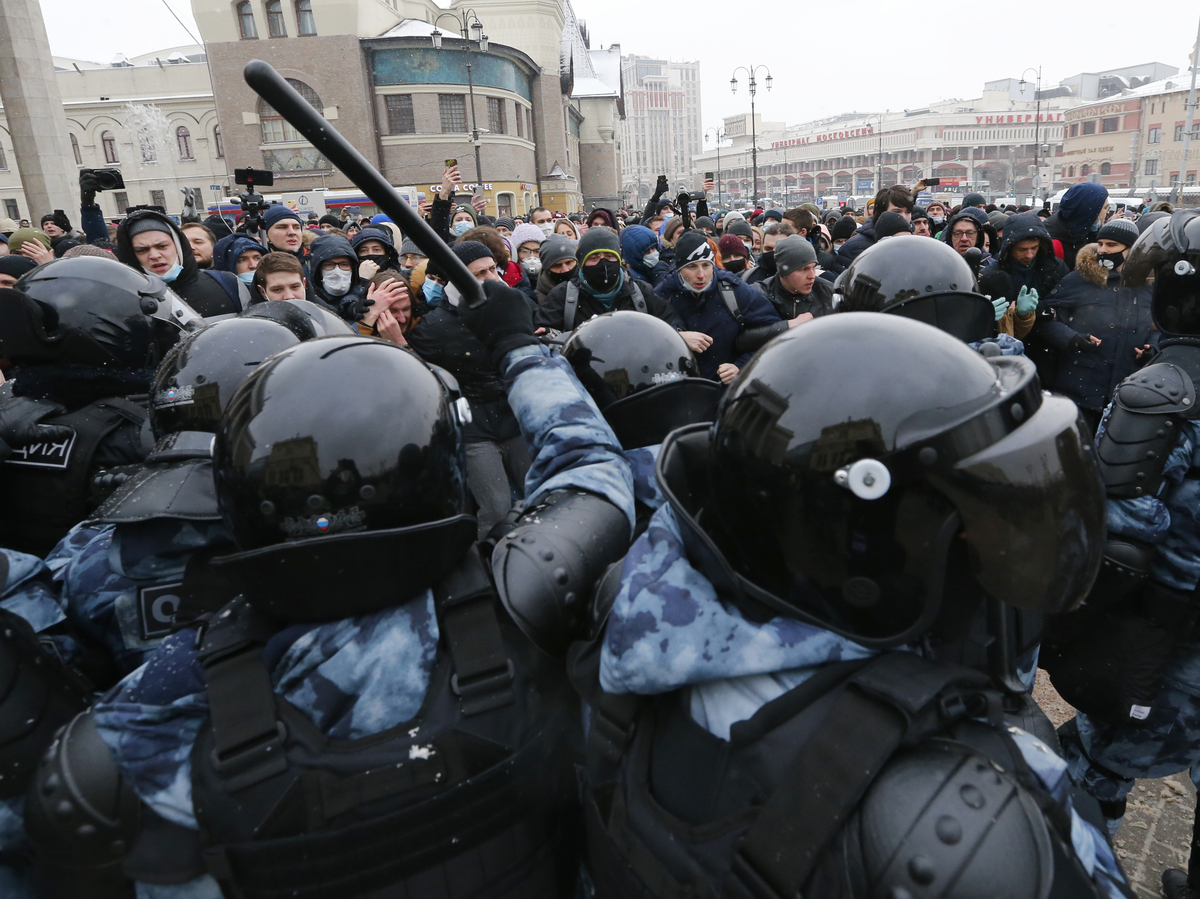 Demonstrators in Moscow clash with police Sunday during a protest against the jailing of Alexei Navalny. Thousands of people took to the streets across Russia to demand the opposition leader’s release.

Protests have gripped Russia for a second weekend in a row, as thousands ignored warnings of a mass crackdown and returned to the streets Sunday to once again demand the release of jailed opposition leader Alexei Navalny.

In a replay of last weekend’s demonstrations, protesters were met by a vast show of force by the Russian authorities.

In Moscow, police in riot gear lined the streets and set up checkpoints, as city officials shut down seven Metro stations around the Kremlin in an attempt to restrict movement in the Russian capital. By early evening local time, nearly 4,000 people had been arrested throughout the country, including more than 1,000 in Moscow, according to OVD-info, an activist group that monitors arrests at protests.

The heavy police presence in Moscow left demonstrators scrambling to revise their plans. Roughly an hour before the protest was scheduled to begin, organizers announced new meeting points, including outside the prison where Navalny is being held. Originally, the plan had been to gather at Lubyanka Square — home to the headquarters of Russia’s domestic intelligence agency, the Federal Security Service, which Navalny has blamed for his near-fatal poisoning in August. Navalny has said the Kremlin was behind the attack — a charge Russian President Vladimir Putin has denied.

“In Russia, the government is suppressing anyone who has an opinion different from a very narrow point of view. And if you are different, you are suppressed,” said one protester, Elina Mukharlyamova. “The propaganda makes you feel alone. That’s why we came here. To show that we are not alone. That there are many of us.”

Similar scenes to what was happening in Moscow played out elsewhere, as protesters and police clashed in cities across the country. In the eastern port city of Vladivostok, police closed down the city center, forcing demonstrators onto the ice of a frozen bay, where they chanted, “My Russia is in prison.” In Putin’s home city of St. Petersburg, crowds gathered in a central square chanting “down with the czar.” Video footage showed officers swinging batons at protesters and arresting a person wearing a bright yellow press vest.

Protesting on ice. In Vladivostok they’re shouting ‘My Russia is in prison!’

Numbers today may well be lower: the risk of protesting is v high-from probs at work/college or a few days’ detention to full-on criminal prosecution. But the protest mood is clearly growing here. https://t.co/kjlcfdBCp4

In a statement on Twitter, U.S. Secretary of State Antony Blinken decried the violence and called on the Russian authorities to release protesters.

“The U.S. condemns the persistent use of harsh tactics against peaceful protesters and journalists by Russian authorities for a second week straight,” Blinken wrote. “We renew our call for Russia to release those detained for exercising their human rights, including Aleksey Navalny.”

Sunday’s rallies come eight days after protesters mobilized for Navalny in roughly 100 cities across Russia, marking the largest and most widespread wave of demonstrations for the country in years. In many cities, protesters clashed with baton-wielding riot police, and more than 3,000 people were detained, according to OVD-info.

The continued protests have highlighted the extent to which a desire for change and frustration with Putin has — as much as support for Navalny himself — bubbled to the surface, particularly among younger Russians. The Jan. 23 protests unfolded across all 11 of Russia’s time zones, fueled in large measure by members of a generation who have only ever known one leader in their lifetime. And while few experts believe the protests pose an immediate challenge to the Russian president, Navalny’s anti-corruption message, coupled with his dramatic return from poisoning, has made him a particularly influential figure in the opposition movement.

“Putin is now in a no-win situation,” said Julia Davis, a Russian media analyst with the Atlantic Council, in an interview with NPR. “If he kills Navalny in prison, then he becomes a martyr and it would be impossible to deny who is responsible for that. And if Navalny is allowed to continue to function, he will continue to be a thorn in Putin’s side.” 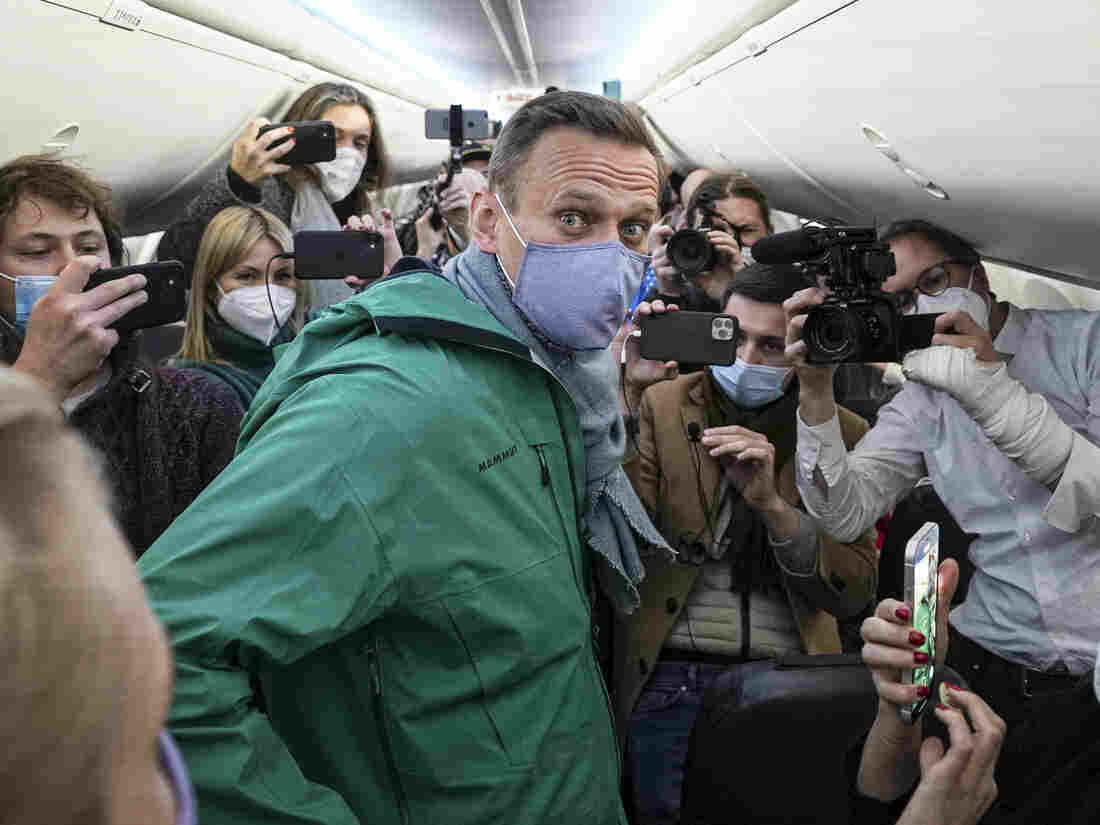 Alexei Navalny is surrounded by journalists on a plane Jan. 17 before a flight to Moscow at Berlin Brandenburg Airport. Navalny was arrested upon his return to Russia. 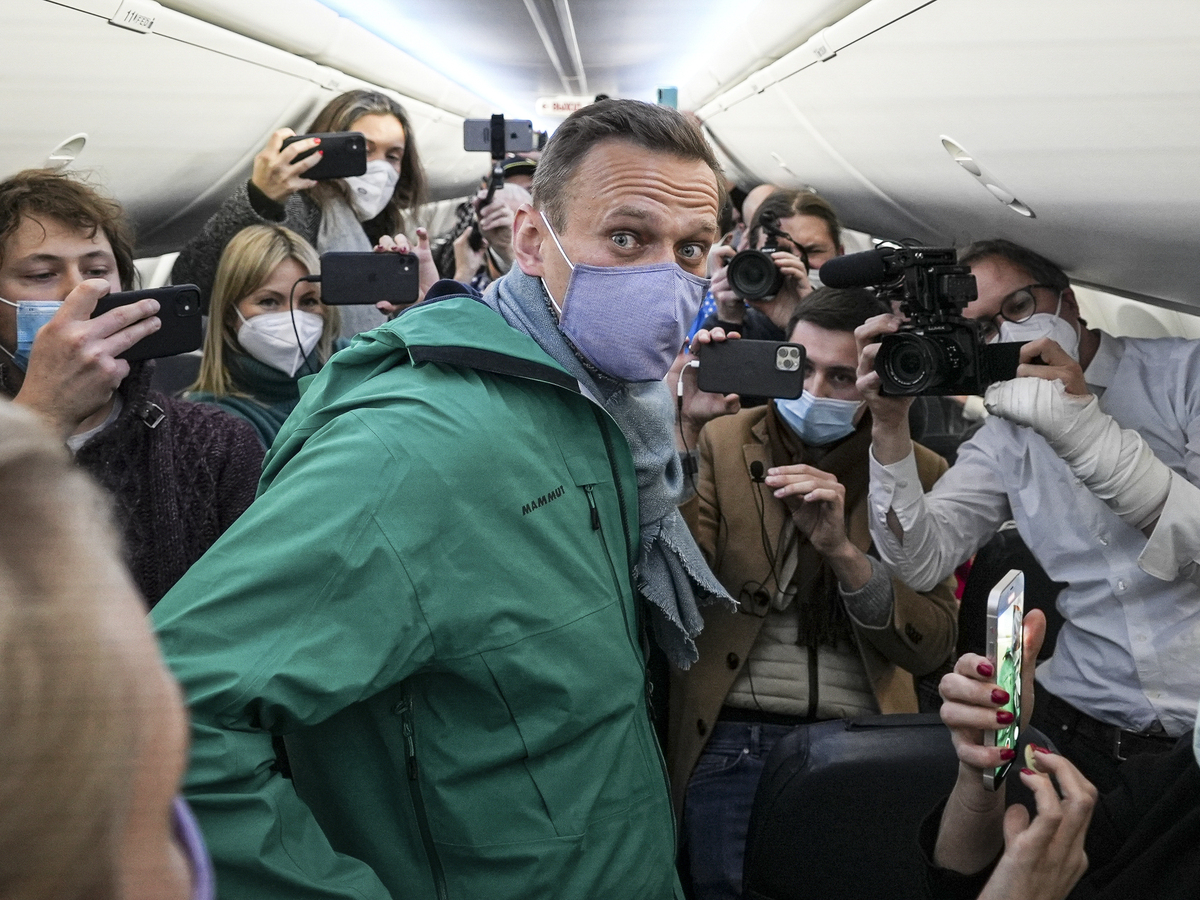 Alexei Navalny is surrounded by journalists on a plane Jan. 17 before a flight to Moscow at Berlin Brandenburg Airport. Navalny was arrested upon his return to Russia.

Even from jail, Navalny has managed to continue to frustrate the Kremlin. Earlier this month, his team released a scathing investigation accusing Putin of corruption and detailing the construction of a lavish palace on the Black Sea allegedly built for the Russian leader using a “slush fund.” The investigation, titled “Putin’s palace. History of world’s largest bribe,” has already been viewed more than 100 million times. Putin has denied he owns such a palace, telling a group of university students last Monday, “Nothing of what was indicated there as my property belongs either to me or my close relatives.”

In anticipation of Sunday’s protests, Russian authorities moved this past week to clamp down on leading opposition figures and several key aides to Navalny. Authorities arrested Navalny’s brother Oleg, as well as Lyubov Sobol, an attorney for Navalny’s Anti-Corruption Foundation, Maria Alyokhina from the Pussy Riot punk group and Anastasia Vasilyeva, head of the Alliance of Doctors, who was filmed stoically reciting Beethoven as police searched her Moscow flat. Authorities said they were arrested on suspicion of violating coronavirus restrictions.

Anastasia Vasilyeva, an ally of Alexei Navalny, decided to play the piano while police raided her house along with other properties connected to the Kremlin critic pic.twitter.com/BkGOQVyVEK

On Thursday, a Moscow court rejected an appeal by Navalny for his immediate release from jail. In an appearance before the court via video link, the 44-year-old opposition leader vowed that the protest movement he has helped inspire would continue regardless of whether he was set free.

“You won’t succeed in scaring tens of millions of people who have been robbed by that government,” Navalny said. “Yes, you have the power now to put me in handcuffs, but it’s not going to last forever.”

Navalny was arrested on Jan. 17 upon returning to Russia from Germany, where he had spent the previous five months recovering from being poisoned. Doctors in Germany say he was poisoned with a variant of a Soviet-era nerve agent known as Novichok.

Russian authorities said Navalny was arrested for violating the terms of a suspended sentence dating to a 2014 embezzlement conviction. Navalny says the charges against him are politically motivated. A Moscow court is due to rule next month on whether his 3 1/2-year sentence in the case will be converted into a prison sentence.

Joel Greenberg tried to get pardon from Trump through Gaetz: report – Business Insider