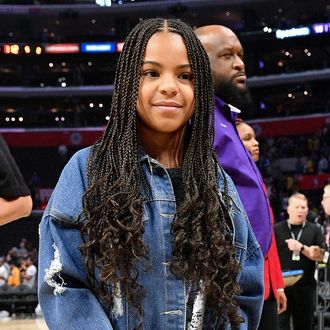 After the Recording Academy released their 2021 Grammy nominations in November, hew and cry went up (at least, in the Vulture Slack) about the noticeable absence of Blue Ivy Carter’s name from mom Beyoncé’s Best Music Video nomination for “Brown Skin Girl,” despite being credited as a featured artist on the track. In fact, you can hear Blue Ivy’s vocals, and see her patty cake skills, in the song’s music video, which dropped on August 24, right here. Well, as AP reports, Blue Ivy is as of this week now a Grammy nominee, her name having been recently added to the nomination on the Record Academy’s Grammy website.

Nigerian singer WizKid, who joins Bey and her daughter on the song, has also been added to the nomination, which initially only featured Beyoncé’s name. However, SAINt JHN, who also sings on “Brown Skin Girl,” remains absent. You can hear his voice harmonizing with Blue Ivy at the very beginning of the track, though he does not appear in the music video.

The Grammys are currently scheduled to air on Friday, January 31.

Sunday College Basketball Odds & Pick for Michigan vs. Michigan State: Back Wolverines To Cover Against Spartans (March 7) – The Action Network

Sunday College Basketball Odds & Pick for Michigan vs. Michigan State: Back Wolverines To Cover Against Spartans (March 7) – The Action Network